I was going to write this as limericks, but they just didn’t come. (They’ve been one of my funnest things --- for birthday roasts, presentations & even a funeral eulogy.)

My final wife, Stephanie, & I are living in Armidale, NSW, because for us it’s the best place in the world: Rogue River Valley weather, a not-growing & friendly population of 20,000, a university, great cycling countryside, and our 17 acre farm with relocated 1880’s “station” house (all for under $US100K).

I discovered Armidale while playing hooky from the Odyssey 2000 all-year world bicycle tour. We did O2K as a) an adventure and b) as a way to figure out where to live. We needed to leave Colorado because a) it had gone all to hell and b) I had been recalled off the Loveland City Council for being too strong on growth/sprawl control. I was elected as a long-shot greenie candidate after become an a) enviro activist and b) amateur farmer in the ‘80’s. I had moved out of Denver-Metro after a) spending a ski season as a cook in Steamboat Springs and b) realizing that for me big cities suck.

My prior consulting practice had pretty much run out of gas due to lack of interest --- a) mine and b) the clients’. I had become self-unemployed after moving to Denver in the late ‘60’s to consult with a Big 8 (7, 6, 5, 4…) CPA outfit. Previously, had attempted hotshot business career in SoCal real estate limited partnerships (how embarrassing) and at General Mills (serving society through snack foods). Went to GMI in Minnesota (Brrrr) after a summer stint between years at Stanford Business School, attended a) for business know-how NOT received at Pomona and b) to stay out of Viet Nam, which wisdom was mostly attributable TO attending Pomona.

So, by choosing Pomona, I am:

a) still alive and

b) retired in Paradise.

(Editor's Note: The following is a recent update from Alan and Stef.)

We did move our house about the end of February (only 5 months after we expected it). There have been some ups and downs (we had to install new roof trusses and we found some termite damage), but in general we are very happy with our choice. Plumbers, roofers, carpenters and electricians have been tromping in and out and up and down and we have made great progress. We finally moved in the end of June and it is very much like the Odyssey biking trip we took: high-level camping. It's been very cold here; all of the natives are saying they haven't seen a winter this cold for 30, 40, 50 years (take your pick). So although the big room with the wood heater is nice, the bathroom is not heated. It gets a little chilly taking showers. But we just got a door on the bathroom the other day, so we are making progress.

Although it rains more than in Colorado, water is still an issue. We aren't on a city system but actually collect rainwater from the roof when it rains. So now that the roof is on, we are hoping for it to really rain so we can start collecting water. Unfortunately, we have had very little rain since the roof was finished. So we are sparing with our water - another good thing we learned from Odyssey.

Now we are discussing the important things - like do we get a dog? We haven't had a pet since 2000 and we have 17 acres for a dog, probably two, to run around in. We're planning our landscaping about now (Spring is a month or so away). We've decided to plant mostly native plants - they know how to cope with less water with just a few exotics (as they call them here) for around the house. During normal weather, it's pretty mild here and you can grow palm trees, wisteria, citrus etc. I'm doing yoga, volunteering on boards of charities, riding my bike (mostly when it's warmer) and generally just cosying into retirement. If I had to get up and go to work everyday, I don't think I could anymore.
- Stef

The 2nd bath & warm weather will start shortly, so visitors are heartily welcome. I'm enjoying starting my Social Security application process: the website is great, but can't handle expats, so I have to go thru Manila. After slaving away over my 12 year work career, I'll get all contribs back in 30 months, & am not too concerned about a SS deficit after 2030. A great system, or what?! Soon off for a typical Sunday morning junket: the hobby farm show/market (@ 1 of about 10 outdoor event venues in town), stealing 8 more poplar trees for the windbreak from the Racecourse (2nd of 10), hitting the grocery stores for their wonderful Sunday used meat & veggy deals, a newspaper (I'm trying to organize enough neighbors' subscriptions to justify delivery) and finally picking up a small tankload of water to replace our missing rainfall (the trailer & garage-sale water tank are well amortised).
- Alan 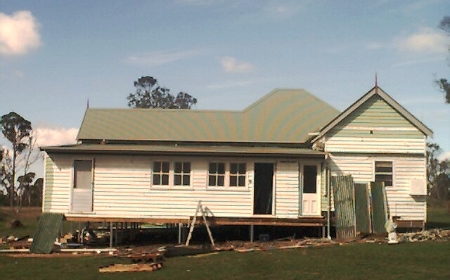