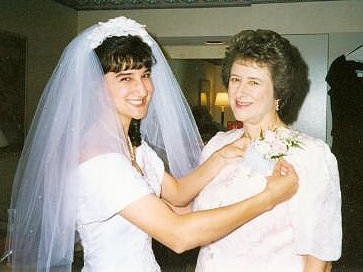 Since I left Pomona, I've had several careers. I went to grad school at UC Berkeley and got a masters degree in library science; and then I worked at Mills College for a couple of years, which I loved. I loved being able to look up any information, on any subject, in any language. I was also responsible for teaching freshmen classes how to use the library and I became aware that I loved teaching. I've been teaching something every since.

During that time, I married René Pieper in 1966 and in 1968 we had premature identical twin boys. Tim died; Tommy lived until he was 19; he died in 1987. Tommy had cerebral palsy and was severely disabled. In addition, our daughter, Debbie, was born in 1971, so I was really busy for a while, in effect taking care of 2 infants. (Tommy's physical needs were those of an infant, even though he was 3 at the time)

Being the mom of a disabled child changed my life in ways I could not have imagined. Our marriage didn't survive, though René and I remain on very friendly terms. My values changed. I learned what is really important in life and what isn't. My priorities became clear. I became much more aware of and interested in what goes on inside people and much less concerned with the external.

When I was ready to go back to work, I realized I didn't want to be a librarian anymore. Eventually, I went back to grad school, this time at Cal State Hayward and got my masters in Counseling Psychology. I became a licensed marriage and family counselor in 1980.

I worked part time for a while. Tommy's health continued to decline and by the time I went to our 25th class reunion, I was talking to several of you about what was going on. Tommy died a couple of months later.

I wanted to use what I had learned as a bereaved parent to help others going through this difficult experience. When I felt ready, I specialized in working with other bereaved parents. I have repeatedly been asked if I found that depressing. No. I was with people at a vulnerable time in their lives, and I liked how real they were. Most people didn't have the energy to keep up their social masks. This work also gave meaning to my life. I did this work until 2000; I have now retired.

I spend time now doing all kinds of crafts, and being in boutiques. I have just started teaching a sewing class at a nearby Assisted Living Center on making stuffed animals. These stuffed animals will then be given to children in a local hospital. So, hopefully, the activity benefits both the seniors that I'm teaching and the children (My idea of "seniors" keeps changing the older I get!). I also do volunteer work with the American Association of University Women. I'm currently involved in a conference for middle school girls.

I'm still in touch with the family I lived with in Denmark after I graduated from Pomona. I've been back to see them several times and we continue to correspond.

I'm not sure what my plans are for the future. I love living in the San Francisco Bay Area and I expect I'll be living here for a long time.