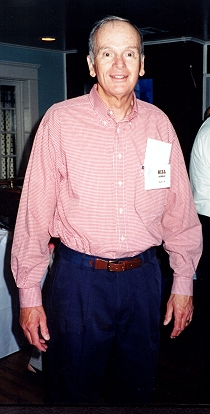 Following graduation I received an MBA from UCLA. After six months on active duty in the Army I went to work for Pacific Bell. During my 27 years there I had a number of interesting assignments working in both Southern California and the San Francisco Bay Area. Certainly, the highlight was the three years I spent as General Manager for Telecommunications for the 1984 Olympic Games. I took early retirement in 1991 and worked on a number of very interesting consulting projects related to strategic planning for broadband and wireless applications. Coincidentally on the first of these assignments I was working for Apple Computer and ran across another classmate, Pete Johnson. At the time we may have been the two oldest people in their entire organization. I retired from consulting in 1997 and have been busy serving on the board and as president of our local education foundation, which supports the public schools in our area.

My proudest, most memorable moments center around my family. The best decision I have made occurred in 1971 when I married Carol Shoemaker, a 1966 graduate of Pomona. The second best was to attend Pomona. We have two sons, Stephen, a 2000 graduate of Pomona who is in his second year of law school at USC and Peter who is attending the University of San Francisco.

Reflecting on my Pomona experience the things that are most important to me are the friendships that I have made and the benefits of having received a first class liberal arts education. Frequently I reflect on the benefits of that education in helping me relate to others and to an ever-changing world. Some of my favorite professors were Lorne Cooke, who introduced me to economics and began what is a lifelong interest in the “dismal science.” I also remember Rusty Rostvold, Bob Herman, Lee McDonald, Hugh Flournoy and others whose passion for their disciplines helped to pique my interest in their subjects.

As I look to the future our immediate plans this spring will be to attend a number of collegiate baseball games, as this is our youngest son’s final season playing for the University of San Francisco. Beyond that I plan to stay involved in supporting our local schools, exploring some new opportunities for community service, playing some golf and doing some traveling. Both Carol and I plan to continue our near lifelong involvement in the Pomona College Alumni Association.