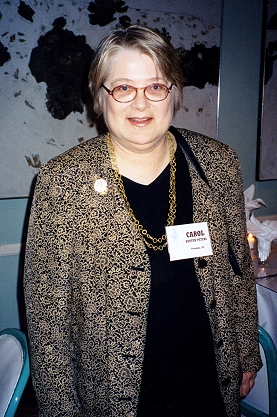 "So quick do bright things come to confusion."

William Shakespeare, Much Ado About Nothing

Memorable Pomona experiences:
I wanted to go to Smith. But with a dying mother, my family expected my artist/professor brother, John Hunter (‘56 Alpha Gam), to oversee my welfare. I had helped him and Richard Chamberlain move into their freshman dorm seven years before. So delivering me to Sophomore Men on Harwood’s porch, John hollered from the curb, "Carol, did you remember your toilet paper?" and drove off.

I felt like such a noodle. Everyone else knew how to k-noodle their Noodles; where was mine? While you were reading Proust and living Proust, I was wondering, "Now what do I do?"

Freshman suitemates Cathy Cobb, Robin Chen and Barbara Turner can attest that I was stunned when my mother expectedly died of cancer the week before our Frosh Show Sinderella, when even Director Mike Ledeen was kind.

Satisfying and kind was the warm Sig Tau fraternity serenade when Steve Peters (‘61) and I were pinned. We later married, and then later divorced. Now we are both estate-planning attorneys in Pasadena. Having had a good time last year, he was coming with me to this 40th Reunion, but the scheduling of a Bar-sponsored mediation training interrupted. He has been an excellent father to his 2 children of his 2nd marriage, and a kindly Dutch uncle to my daughter of a later marriage, HEIDI-LOUISE HUNTER HECKENDORF.

On uncoupled motherhood:
"S/he who has a Why can live with any How." - Nietsche Heidi did not want to go to Pomona either. She attended Yost Amrein’s last lecture at the 20th Reunion of ‘61 when she was 4 months old. After St. Mark’s School (K-6) and Flintridge Prep (7-12), she is now a searching sophomore at Seattle University (Jesuit school).

Favorite professor and why:
JEANNETTE HYPES kept me anchored, warming my cockles by believing in me. She laid out the importance of personal discipline. (Now when I am not exercising, I know both literally and figuratively.)

ROBERT FERM said, "I’ll define God for us so we can move on: ‘God is a purple oblong blob’. Now, who wants to answer my question?" (Growing up in a parsonage, I converted to Reform Judaism, enjoyed a 4-year EFM class, and am Chancellor at St. Mark’s Episcopal parish.)

HARRY CARROLL in Crete, said, "Why do you want to be a lawyer?" Recalling his friendship with Steve’s father, Bill Peters, as President of PC’s Dad’s Club, I opined, "Well, Father William always said that the Law enabled a natural bastard to become a real bastard, so I thought I’d see if I could become a real bitch." Harry shook with laughter while Olive poked him in his ribs, to be nice. Gasping, Harry pointed at me and sputtered, "She’s NEVER going to make it!" (Hmmm)

Personal recollections:
1990: People To People trip to 5 Eastern bloc countries to meet with lawyer/judge counterparts re "How To Make Decisions Without A Totalitarian Point Of View"; they thought we knew how.

Early ‘80's: Two custody trials with guards in the courtroom. After the first time, I decided never again. The 2nd time the presiding judge ordered them but no one told me why those four crew cut men were watching this trial.

Professional life:
"To see justifies deception." Foucauld. I think abusers of the elderly believe this. I am an elderlaw attorney, providing pre-need LTC Medi-Cal services. I see a lot of financial abuse as a substitute for real planning. See my favorite webpage at www.firms.findlaw.com/elderhelp. On the White Knight side of theft, when able to pursue financial elder abuse, I could write a much improved thesis on Lord Chesterfield’s letters telling his son that "the end justifies the means". I may have applied - albeit unknowingly, unintentionally and inadvertently, but absolutely volitionally - what I tried so hard to master in college. I seem to have survived two careers (public benefits social worker and attorney) in one lifetime, with more to come.

Regarding the future:
"As long as you live, keep learning how to live." Seneca. I hope each classmate who has trekked to Nepal already will wear an ankh to the Reunion! I want to hear the stories, but avoid the hardship(s).