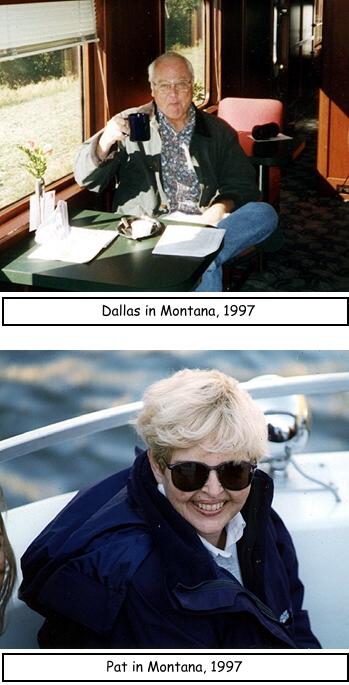 When the boys left home just over a decade ago, we wondered all of a sudden where the last twenty years had gone. I guess our family life and its wonderful multiple commitments had just filled all our waking hours (and a few sleeping ones) to the point that there was little room for anything else. No complaints, however...we could not be more proud of Mark and Toby, and their beautiful, successful wives, and now first granddaughter Olivia, who by all indications will be leading the USC and Olympics volleyball teams in 2020. Too bad we won't be here to see it, but surely some of you will, so...remember what we said! She will be the tall, good-looking one with strong legs and curly hair.

Since college, Pat has been an elementary school teacher in three districts around the state, and then after the boys got older, a part-time cost accountant at the University of California Extension working on the quarterly course catalog. After more school in London and Berkeley, I have been a lawyer and now a judge and have gotten the chance to teach a little law at the grad school of business at UCR and at Hastings. My plans were to quit this job when the new law school at UCR opened and teach some environmental and land use law there, along with perhaps a trial practice clinic, but now that school may not happen soon enough to do me any good.

One of the stock questions we are supposed to consider answering is, "your proudest moment since graduation?" I guess mine would be my wedding day at St. Andrews Presbyterian in Newport Beach and the old Newporter Inn...friends from England and Canada called, Pat looked so good, my parents were so proud, I still had some hair and had lost fifteen pounds (which I gained back on our honeymoon...the pounds, that is), and it was all in all a great party.

Pat says she can't pick a single proudest moment, because there were so many, all having to do with our kids...seeing the older in his new baseball uniform right after being called by his school and told he had gotten 7 "A"s, hearing that the younger had taken our aged collie dog to the vet for the last time because it needed doing and at that moment we simply couldn't ...all family, and all so much more important in retrospect than we realized at the time.

We have both been very, very lucky. As I write this I am between trials in the courtroom I first visited as a teenager on a special school project at the invitation of the judge who turned out to be both my mentor and one of the two finest men I have ever known (as well as Dean Sanders' brother-in-law)...if that hadn't happened, I would probably have gone to USC and never met my wife (or any of you)...and who would have thought that 45 years later that courtroom would be loaned to me by the people, and that I would be able to work here in a corner of our hundred year old restored Beaux Arts Court House modeled after the Petit Palais and the Grand Palais of Fine Arts at the 1900 Paris Exposition, and be able to walk here from our almost hundred year old Craftsman built by a family from Pasadena named Gamble (it can't be, of course) who wanted a second home out of the city's noxious damps...see what I mean? Lucky.

We look forward to seeing you in Claremont.