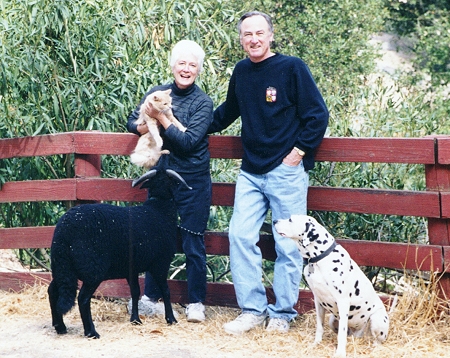 The best thing about Pomona was, for me, the worst thing about Pomona. It provided a protected time of intellectual expansion and the support of smart, caring, and like-minded peers and mentors. But it did not prepare me for Harvard Law School or the real world.

Two experiences book-ended my years at Harvard. The first was just before classes began, when I asked a student going up the long stairs to the library if she would drop my book in the return bin at the entrance. She said, "No;" just "No." The other was when I found out before my last exams that the law review students were studying from canned outlines---rather than personal notes carefully distilled from many lengthy court decisions which, our professors said, was the only proper way to learn the law.

I am grateful for and have great pride in Susan, who has kept me alive, and in each of the three kids she nurtured. I had rewarding jobs in the public sector: Chief Counsel for the Bay Area Air Pollution Control District, and City Attorney and City Manager of Oakland. I devised several unique municipal financing methods, and almost succeeded in acquiring the Raiders franchise for the City by eminent domain, but eventually had to leave because of my skin color. Private practice since then has been a series of ups and downs, and increasing frustration with the court system.

In response, I acquired some non-intellectual expertise. I've remodeled every house we've lived in — opened up rooms, added decks, modernized kitchens, and built an apartment/office in our barn/hayloft with my son, Dan. (Dan and I recently decided to do housing rehabilitation in Austin, Texas, where he got his MBA; write for our limited partnership prospectus.) Dan and I also built a mean 350 Chevy 4-bolt main for his International Scout. I have painted 4 motorcycles and 5 cars, and flamed my ‘56 Ford F100 Big Window. I taught our dog to do 17 tricks, including "Expose yourself," which induces him to flop on his back with legs akimbo.

My continued naïve faith in logic, proportion, and "truth will out" is partly my own fault, as well as Pomona's. I should have learned otherwise from my dealings with Al Davis and Joe Alioto. I wish Pomona had been a little more willing and able to advise me about the real world. Instead, it induced me to believe that the honest and generous students and professors at Pomona were the norm (e.g. Jerry Smith, Peter Tarlton, Tom Weinberg, Tom Hutchins, Connie Fross, Carol Plumlee, Margie Scott; Dean Beatty, Professors McDonald and Rostvold). But it was glorious for four years, and I would not trade the experience for any other. 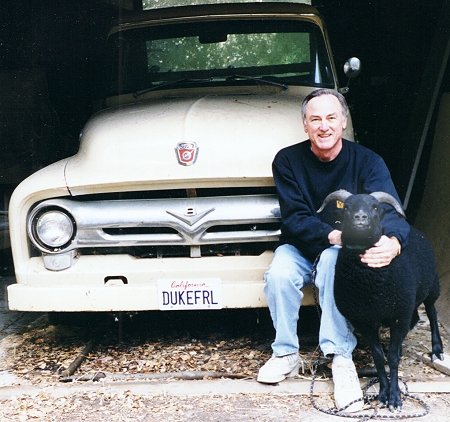 Dave Self with his 1956 Ford F-100 pickup truck and his Welsh Mountain Sheep, Sir Toby Belch.