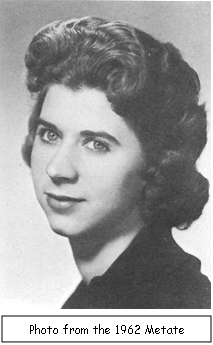 Interesting — trying to summarize a life in one page. During my existential, nihilist, or whatever, phase at Pomona, we used to say “I was born, I am suffering, I shall die,” which was certainly short and simple. Obviously, real life eventually intruded on adolescent philosophizing, and it became clear that things were a bit more complicated and that the joy was in the details.

Ron Gebhardt [Caltech ‘62] and I were married before our senior year, which improved both our study habits and our grades, since we had no money to go out and play; also, being out of the dorms, I was no longer tempted by those wonderful all-night bridge games and ‘solve the problems of the world’ sessions ;-). After graduation, we moved east so Ron could do grad work at Princeton. The theory was that once he finished, we’d move back west; also, since I worked to put him through grad school, he would return the favor. Neither of these things happened.

After Princeton, we lived in various places in the east, depending on where Ron’s career in the cement industry took us. In 1980, he was transferred to the Lehigh Valley in Pennsylvania, and we decided to build our dream house and try to stay put for awhile. Amazingly, we’re still here. We have 3 ½ acres of woods on top of a hill that overlooks the valley, and, aside from the climate, we really like it here. Eventually, we plan to move to Hawaii and never see snow and ice again.

Over the years, I’ve had many disparate jobs, none of which were directly related to my history major. I did research for an Econ professor at Princeton and, later on, at the Brookings Inst. in Washington. During the craziness of the late 60’s and early 70’s, our house became a refuge for neighborhood teenagers whose parents were freaked out by the long hair, funny clothes, and “weird” music of the time, and I frequently acted as counselor for both the kids and their parents; a few years later, I helped some of the same kids with their college applications. I have been a grant application writer and general resource for a friend who teaches in the inner city; I was a full-time mom (Rusty, Pomona ’95); and I’ve been a free-lance writer and editorial consultant, mainly in technical areas. Also, shortly after Rusty was born, my step-dad died after a long battle with Parkinson’s; my mother planned to move to Hawaii but took a wrong turn and ended up living with us for the rest of her life. The fact that we didn’t kill each other I consider one of my greatest accomplishments!

For various reasons, I’ve needed to learn a number of different things since I left school, among them statistical analysis, computer programming (anybody out there remember Fortran?), the legalities of naturalized landscaping (we ended up in court fighting [successfully] an idiotic weed ordinance), hazardous waste permitting, and, most recently, the intricacies of writing a successful patent application. These do not include the learning I do for fun. Although my history major had no direct bearing on any of these endeavors, it did teach me to think and how to learn. More importantly, the entire Pomona experience gave me the belief I could learn anything and the skills to cope with whatever came along. Once you’ve had an eight o’clock class with Learnihan — and survived — nothing is impossible!

My most recent trials have included trying to keep the squirrels (and an occasional bear) out of my birdfeeders (impossible) and the deer out of the rose garden. Also, for most of our married life, Ron was on the road 70-80% of the time. Now, he’s cut way back on his traveling, so we’re both learning a new way of life. The challenges continue.