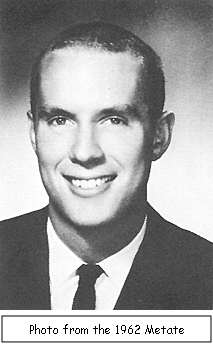 Judging from the notes in Pomona Today over the years, I don’t think that many of the Class of ’62 have spent their entire careers working for large corporations, as I have. Leaving Pomona with a degree in Economics, but unable to get a job, I attended Wharton’s MBA program, majoring in Accounting. I then spent eight years at Andersen. They are taking their lumps now, but in the 1960s it was a great place to work, providing a solid business education. I went to work for a client, Georgia-Pacific, and have spent the last 31 years working as either a controller or treasurer of large, publicly-owned companies such as G-P and Weyerhaeuser. The last 16 years have been at Precision Castparts Corp. in Portland, ticker symbol PCP (go ahead and chuckle — it took our conservative founder two weeks to agree to that symbol when we listed on the NYSE). Our website is www.precast.com – log on and see what we do. Each of the companies has been strong financially, and in the business of growing through both operations and acquisitions. I have probably been involved in 100 acquisitions over the years – I have lost track. Each company’s sales and profits grew significantly while I was working for them. PCP’s sales of $325 million when I joined have grown to $2.7 billion this year.

Other than Weyerhaeuser, which may be where Dilbert works, these companies have had fairly small management teams. Most of the time I worked in the corporate group, close to the action where the decisions are made. Overall these companies have created a considerable amount of value for shareholders, which means that they have been contributors to society as a whole. They have been good, tough competitors, ethical and honest. Their financial reporting has been complete, above board and not misleading. My CPA certificate has always been very important to me. I never felt that I would or could risk doing anything to risk the loss of that certificate.

None of these companies were high-flying “dot-coms”. Their stocks have certainly gone up as well as down. (A little more “up” right now would be okay.) But as I sit here after 39 years of working in big business and look first at the dot-com crash, and now the Enron / Andersen train wreck, I am puzzled. I know that one can earn a decent living working for honest and above-board companies. I just don’t understand how the greed (Enron) and stupidity (Andersen) of a few people can lead them to doing things that jeopardize entire companies and hundreds of thousands of employees. I am proud of the companies I have worked for. It really burns me to witness the recent deeds of a few companies, and to read of the lack of confidence of many Americans in big business. I have worked hard to establish and improve the reputation of my employers, and I resent being tarred with the broad brush of anti-big-business sentiments. Businesses can be run ethically and properly, and I think my companies have been. I would do it all over again the same way. Working for large corporations can be fun, heady, creative, positive -- and stressful.

I have been married for 33 years to Jan, a business graduate of Oregon State. We have lived mostly in the Portland area. We have two sons, Jim and Jeff, who are both graduates of the University of Oregon. Jim has a degree in business, but hasn’t enjoyed it as much as his father, and is presently completing a teaching certificate Masters program to be a secondary school Spanish teacher. Jeff is a musician with a degree in music composition, and he is completing a Masters program to get his teaching certificate in secondary school music. Jeff is married, but no grandchildren yet.

Jan and I love to travel, and have been to many parts of the US. In the last few years we have been to Europe a few times, and we have a list of many more places we want to go. We took our first cruise, and have been to the major cities of Europe. I am starting to make retirement plans, so we will be doing a lot more traveling in the relatively near future.

I have developed a major interest in opera. I remember very well during our freshman bridge sessions in the Sponsor Group having Phil Anderson tell me that the Bolero I was listening to would be just the introduction to music, to be followed by Tchaikovsky, then Brahms, Beethoven and more. He was right, and they all came along. I got into opera (Saturday radio broadcasts, parents) and tried to absorb Verdi, Wagner, etc. Over the years I have settled into the bel canto corner of nineteenth century Italian opera, favoring the works of Bellini, Donizetti and particularly Rossini. I met Joan Sutherland, Australian soprano, on records while at Pomona, and through her was introduced to Marilyn Horne and Luciano Pavarotti long before they were major stars. I have said for 40 years that I would love to wake up one morning as a tenor, and would then hit the road as a singer. (Little chance of that, as I can’t even carry a tune.) But when I found a real Rossini tenor, Rockwell Blake, I knew that I had found what I would love to sound like. Now I collect new voices -- counter tenors, a new Rossini tenor this year, and many glorious mezzos. Jan and I went to the Rossini Opera Festival in Pesaro, Italy, last summer, which is Mecca for those with similar interests.

After joining in the Oregon jogging for about 15 years, I moved on to bike riding. Easier on old guys. I have ridden close to 10,000 miles in the last 13 years. I gave up golf several years ago, when I finally figured out that I don’t get mad at my bike.

I really enjoyed Pomona. It was right for me. I grew up a lot, learned a lot, and met many wonderful, talented people. Throughout my career I have been fortunate to work with bright people, but the whole lot of them don’t come close to the collective talent of my Pomona classmates. I often remember our great teachers, including Rostvold in Economics (who introduced me to Accounting), Dean Beatty’s novel class (books, but it was novel, too), and Dean Strathmann’s Shakespeare tragedies class. We attended the Ashland Shakespeare Festival recently, and a great performance of Julius Caesar reminded me of Dean Strathmann’s love of those plays.

My best to all of you at the reunion as well as those who also cannot attend.