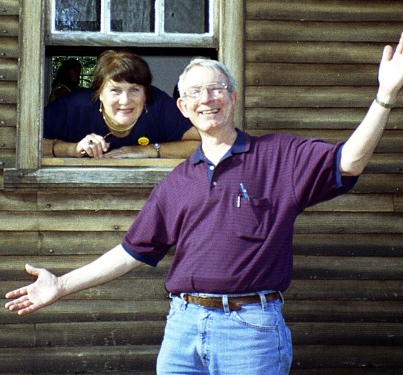 After Pomona I spent five years in Bloomington, Indiana, leaving with my chemistry Ph.D. and my wife, Roz. I returned to my birthplace and a short post-doc at UCLA. Though I had always wondered why on earth anyone would live in San Bernardino, that is where the job I wanted was. I've enjoyed teaching physical chemistry and some computer science at Cal State U and still have a few more years of enthusiasm left. However, the growing fraction of students who cannot divide 120 by 10 without a calculator is wearing me down.

Roz and I traveled a lot before we met, and our annual summer trips give us the most fun together. Traveling abroad for several weeks, often without reservations, guarantees adventure. Recently we joined SERVAS, a sort of international travel "fraternity". Check out www.servas.org if you want to become a SERVAS traveler or host (we are both). How else could we have arranged to stay in a commune in Denmark, or shared a huge pot of mussels with a couple in their Brussels apartment? Last October we hosted a Canadian who rode his bicycle from Santa Monica to St. Augustine. . . and stayed there with 91-year old Peg, a SERVAS dynamo with whom we had also stayed. And we've had English, Israeli, German, etc., travelers who may later send occasional email to delight us.

In my first class at Pomona Frederick Bracher went around the class asking the name of the last novel we had read. I had read only technical material for several years (I skipped that book we were assigned to read that summer) and took him to coffee to explain why I couldn't answer. Later he returned my report on Graham Greene's "The Power and the Glory" with an A/F grade and one sentence that explained it all. I was the literary equivalent of students who cannot divide. Pomona broadened me.

I visited Marty and Ann Fuller at Colorado School of Mines after his lack of research enthusiasm got him the boot at Pomona. Last I heard he was working in industry in LA. Let me know if anyone knows his address. He was an inspiration in ways I cannot even explain here.