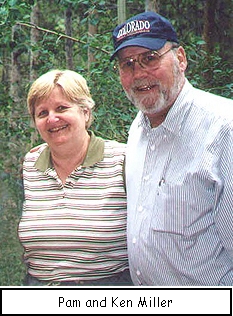 After graduation Ken went back East to Columbia to work on an MBA. I taught elementary school in Pasadena and attended Claremont Graduate School. In 1963 I moved to Tarrytown, NY, finished my Master's in Education (equivalent) at Columbia, and taught school for four more years. Ken and I were married in 1967 and moved to Ridgefield, CT, where we've lived since. I taught school for another year and then we started our family. Ken always had an interest in architecture, and went into general contracting and home building.

I've been involved in Girl Scouting since my Brownie days. I've been everything from a troop leader, to adult trainer, to Council Cookie Sale Chairman, to officer of the Board of Directors. My proudest moment was probably when I was given the Thanks Badge, which is the highest award given to adult Girl Scouts.

Ken has always been involved in Amy and Hugh's sports. Amy was a soccer goalie from grade school through her four years at UConn, and played with and against several of the women on the National Team. Ken was Hugh's baseball coach and greatest supporter in football. Both of our kids are married, one child each, and living in Evergreen, CO. Amy is an audiologist and Hugh teaches high school social studies. He’s also an avid rugby player for the Denver Harlequins and coaches high school football and rugby.

We are both very involved with our Congregational Church. Ken served a term as Property Chairman, and I was elected as the first woman since the church's founding in 1735 to be chairman of the Church Council. I have also been a deacon for several years, and sing in the choir. Those of you who really can sing, don't laugh. Ken is now in charge of the Meals on Wheels outreach, and acting as clerk of the works for our new Sunday School construction project.

I couldn't find a teaching job right away after our kids were born, so I took a temporary position with the Postal Service as a Rural Letter Carrier. Twenty-five years later I retired from the USPS. Fortunately, for the last ten years I was a Rural Carrier Academy trainer and Northern Area Quality of Work Life instructor, also, so my teaching skills didn't go to waste. Ken continued to build beautiful homes for clients in Fairfield County, and just recently retired, too.

Because Amy and Hugh and families all live in Colorado and seem to have no interest in returning to Connecticut, we bought a second home in Breckenridge. It's only an hour away from the kids, so they use it all the time during ski season, and don't have to fight the traffic on I-70. We go out West about three times a year and stay for several weeks. Ken's determined to grow a wild flower garden during Colorado's three month growing season! We delight in our grandchildren, Bryce (2) and Logan (1), and will have another in August. Any Sagehens with an urge to ski or sit by the fire while we're there, come visit!

Pam with her grandchildren, Logan and Bryce