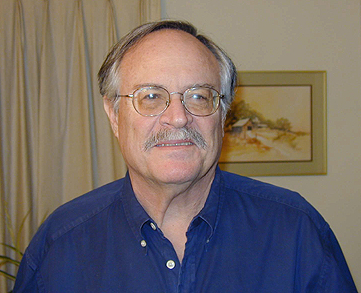 I received my Pomona bachelor's degree in September 1962 after completing six missing units at UCLA. This was occasioned by my failure to come to grips with History of Western Civilization, taught by Mr. Poland (one of my favorite professors, ironically, and the one with whom I shared a father son luncheon when my dad visited campus during freshman year) and an ill-advised and unprepared run at Number Theory with Mr. Cooke. My degree was in German. I had showed a flair for it at Hollywood High School and continued with it at Pomona. I had wonderful classes in comparative literature with Mr. Merlan at Scripps and Mr. Baumann at Pomona. I loved a class on the Beethoven piano sonatas with Russell Sherman. Occasionally I and other students rode in to Los Angeles for the Monday Night Concerts at Plummer Park with Mr. Russell and Mr. Karl Kohn; at one I sat directly behind Igor Stravinsky! I greatly enjoyed the freedom of the open stacks at Honnold Library and learned a lot just wandering around and being curious about many things, mainly those involving literature, art, and music. I listened to many LP's in Honnold's listening rooms. Many wonderful concerts at Pomona and Scripps attracted me; one special memory is of the brass ensemble playing Christmas music outside Big Bridges. One night I heard my first great orchestra, the Chicago Symphony, conducted by alumnus Robert Shaw. As I recall that was my introduction to Gustav Mahler (Symphony #4) and Hindemith's "Mathis der Maler." I couldn't believe how great they sounded! I have good memories of many friends at Pomona, and I think I learned much them during bull sessions into the wee hours. Frequently I forgot to study.

I enrolled as a graduate student at UCLA and soon decided that I was more interested in watching the World Series on the TV in Kerckhoff Hall than memorizing the forbidding Professor Sobel's obscure German abbreviations in Powell Library; besides, attempts at the latter soon became associated with mushroom-like growths in and about my ears, which conspired to dissuade me from such further lucubration in the dank.

I got my teaching credential at UCLA as the Vietnam buildup was gathering steam, and I interviewed on campus for a job with the LAUSD (read "evil empire").

I bought a new Mustang for $2,368 through the UCLA Credit Union, got married, and started as a German teacher at Fremont High School in south central Los Angeles (between the 110 and 710 freeways, between Manchester and Florence) in September of 1964. Barry Goldwater was running for president against Lyndon Johnson. One of my first students, in English 10A (no one wanted to study German!) said, in response to my question as to whom he supported, "One's crazy; one's a crook!" I've never fully resolved that dichotomy.

I taught English (my minor) until 1976. I enjoyed getting students excited about reading "A Midsummer Night's Dream"; they actually rushed to class to get the best parts to enact (the Wall was particularly popular). Other interesting texts we enjoyed were the "Autobiography of Malcolm X," "Our Town," "The Great Gatsby," and "A Raisin in the Sun." You'll notice the absence of Goethe's "Faust" or Kleist's "Erdbeben in Chile."

I moved to the counseling office as grade counselor, hand-writing all my students' programs with ball point pen through 3 carbon papers forms. In 1980, I moved to the computer assisted instruction lab where I ran the whole grading process on an old Hewlett Packard main frame with proprietary software developed by my predecessor; teachers entered their grades on the Teletype terminals reluctantly. I returned to the position of full-time counselor in 1992, assuming major responsibilities in running the student scheduler on the new network. Most enjoyable for me were the times I was able to spend time with individual students in my office, conferring with them about their programs and uncertain futures that sometimes included college but too often did not. The students were always the best part of the career; watching them grow, learn, and gain perspective was most rewarding!

I witnessed the Black Students' Union's takeover of a faculty meeting in the late '60's; they took the microphone from the hands of the principal and dismissed the faculty meeting, issuing imprecations about the "racist, insensitive, and/or incompetent" faculty and administration present in the auditorium. In the next 6 months, almost 40% of the staff transferred or was reassigned!

I recently attended a "Friends of Fremont" reunion from the '60's and happily was reacquainted with one of the "ringleaders" of the BSU rebellion, Larry Welton. I shook his hand, and he exclaimed joyously, "Mr. Wheaton!" Many of those leaders have gone on to become physicians, clergy, and attorneys.

When I started at the 'Mont, it was predominantly African-American. When I retired, in June of 2001, it was predominantly Hispanic. I had some great times there, met some excellent teachers and colleagues, but many people merely collected paychecks and looked to advance their own careers.

My daughter Anna was born in 1968 and is now Director of Library Services at the Art Institute of Los Angeles in Orange County. She holds 2 master's degrees, one in Victorian poetry and one in library and information technology. My son Paolo was born in 1972 and holds a master's in English composition and instruction and is teaching in Hanford, California. Both married classmates in their respective graduate programs at the University of Washington and at Humboldt State University. Anna graduated from Revelle College at UC San Diego; Paolo graduated from the University of Oregon and enjoyed literature studies with Tatyana Tolstaya, descended from Count Leo Tolstoy.

My proudest moments since graduation were the births of my daughter Anna and my son Paolo. My most memorable experience in the past 40 years was taking them to Paris, Rome, Venice, Heidelberg, Florence, and Nice in 1985 for several weeks. Ten years later we visited London, Dublin, and Provence.

My favorite professor, without question, was Mr. William F. Russell (choir). He influenced me more than any one man other than my father. He taught me the beauty of music and the joy of performing it in collaboration with others. We sang the Stravinsky Mass of '48, the Messiah of Handel, Brahms' motets, Berlioz' L'enfance du Christ, Fauré, Poulenc, and most beautiful of all, the German Requiem of Johannes Brahms, which brought tears to my eyes every day I sang it and every day I listen to it now, at age 60. I'm older, not necessarily wiser, but more appreciative.

My plans for the future are to travel, to tour wineries and enjoy tastings, to cook, to write, and to continue to enjoy my friends and family. I shall also remember what good things Pomona College represented.

I look forward to seeing many of you at the Reunion, and I hope I can remember some names.