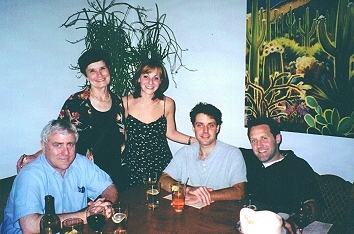 Overview of Working Life Since 1962:

I attended Harvard Law School (together with five other members of the Pomona College Class of 1962) from 19621965. Upon graduation from law school in 1965, I returned to Phoenix and took a job with the then fiveyear old, seven lawyer law firm of Brown, Vlassis & Bain. When I entered law school, I didn't think I would ever practice law. I really wanted to be United States secretary of state, but just couldn't figure out how to arrange that. So here l am, 37 years after graduating from law school, still practicing law as a trial and appellate lawyer at Brown & Bain (Vlassis left in 1975), and enjoying it more than I ever could have imagined. Brown & Bain has 80 lawyers, and at 61, I am the oldest fulltime lawyer at the firm and its chairman. Life truly is "something that happens to you when you're busy making other plans."

My proudest moments since graduating from Pomona College are:

My marriage to Flo in 1965 and the birth of our two boys, Michael in 1968 and Tim in 1970. Flo and I own The Jewish News of Greater Phoenix, and Flo is the publisher of the paper, supervising a staff of 20. Michael is a musician who performs (guitar), writes and teaches. Tim (a 1992 graduate of Pomona College) is a lawyer and is engaged to be married to Keri Gamiel in October. All of us live in Phoenix.

When given the opportunity to run from the truth in a high profile investigation of a former partner who was a member of the Clinton cabinet, I chose the truth, however painful it was for me to be its messenger.

Helping build a law firm that is nationally recognized for its work in intellectual property litigation and that provides employment for over 200 persons.

Most Memorable Experience in the Past 40 Years:

Being one of two prosecutors in the impeachment trial of Arizona Governor Evan Mecham in 1988, an experience to remember.

The most important thing I learned at Pomona College:

How much I didn't know. The second most important thing I learned at Pomona College was how much I could learn if I applied myself.

Lee McDonald was my favorite professor because he taught me that time is not a vacuum to be filled with conversation and that one should speak only when one had something worthwhile to say. I've had a very quiet 40 years.

Ernest Strathmann told me I couldn't understand William Faulkner and shouldn't even try, which of course prompted me to read Faulkner. After 40 years of reading Faulkner, the verdict is not yet in, but Professor Strathmann just may be right.

Plans for the Future:

To learn something new each day and to keep practicing law as long as I find it challenging and exciting and clients want to retain me.