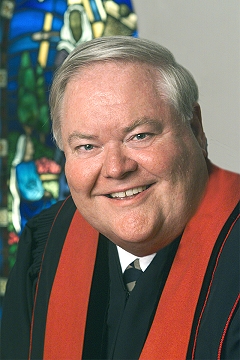 The educational adventure for me after Pomona continued with four stimulating years at Yale Divinity School, founded, incidentally, by the same Congregational ancestors who originally established our beloved alma mater in Claremont. As at Pomona, I was blessed by the excellent faculty, congenial friends, and wonderful inter-school and multi-cultural opportunities. I fell in love with New England and was privileged to serve as the State PF (Pilgrim Fellowship) Youth Advisor for the Connecticut Conference of the United Church of Christ. Graduation was coupled with a service of Ordination into that successor denomination of the Congregationalists.

My first pastorate took me to Warden, Washington and introduced me to small town life in agricultural country. Two years later, my second pastorate took me to the beautiful community of Sebastopol in the rolling landscape of Sonoma County, northern California. Then in 1977 I began my third and final pastorate when I became Senior Pastor of the Church of the Lighted Window (UCC) in La Canada Flintridge (near Pasadena), a position from which I retired two years ago. Throughout my ministry I’ve had the privilege of sharing a spiritual pilgrimage with incredibly supportive people and loving congregations. An assortment of happy and unusual memories includes such moments as presiding at more than fifteen hundred weddings, being invited to be the principal speaker at a joint session of the California Legislature honoring the late senior Assemblyman Frank Lanterman, dedicating the Glendale Freeway, being President of both a Rotary Club and a Kiwanis Club, winning a Pontiac and a variety of other prizes as a contestant on “Wheel Of Fortune,” preaching an Easter Sunrise sermon on the steps of the Utah State capitol, repeatedly being the Protestant panelist on KABC’s (now defunct) talk show, “Religion On The Line”.

Certainly the greatest joy in my life is my wife Pat, who retired about the same time as myself from an executive position with Pacific Bell. My oldest child, Michael, who lives in Bellingham, Washington, is the American student recruiter for a Language School in Tokyo. He and his wife Akiko have two beautiful children, Christopher and Amanda, my only grandchildren (thus far). My daughter Katherine, who is a Human Resources recruiter with PricewaterhouseCoopers, is married to Phil, a computer whiz at Boeing. Demonstrating inscrutable tolerance a few months ago, they moved into a home just four blocks away from us. My youngest offspring, Heather, is an international strategist for Starbucks (I guess they’re running out of domestic street corners). She lives in Seattle and was “rocking and rolling” under a desk on the seventh floor of the aged corporate building during the last earthquake.

The last couple of years I’ve had fun being an interim minister and guest speaker/preacher, as well as promoting my book, THE GOSPEL ACCORDING TO DISNEY – Christian Values In The Early Animated Classics. Pat and I have also done considerable traveling. Our most recent trip included Nepal, India, Thailand, and Taiwan. We hope to do much more of the same in the future. May God bless you all!