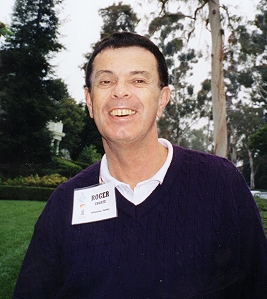 As usual I’m working right up to the last minute, within hours before the magic April Fool’s deadline becomes minor history.

Waiting around until deadlines is one of the few bad habits I picked up at Pomona — last-minute cramming fuelled by NoDoz and whatever else we could lay our hands on. I remember some all-night sessions with Don Zimmerman and Ed Henry, memorizing long lists of French adverbs or something; and the trick was to stay awake just long enough for the exam in the morning.

After Pomona and Columbia U. I became a journalist in order to prolong the deadline habit. During my spells with The Associated Press in the US and Reuters in England we’d have at least two deadlines every day – providing grist for both morning and evening media in addition to radio and TV.

I left the States in ‘68 for what was meant to be my very first vacation in Europe. This “vacation” just goes on and on. I’ve lived in Stockholm, Sweden, since 1971, with my Swedish sweetheart whom I met in the States. We’ve one daughter, Abigail, one terrific grandchild, and a second on the way.

Mixed blessing?
I didn’t have any particular political reasons for leaving the States in ‘68, though I’ve always been fairly left-of-center. No. I just wanted an adventure – to experience what life would be like living in another culture and language. This has been a mixed blessing. Many’s the time I’ve pined for my native California. Basically, though, there are few regrets. And, anyway, pulling up stakes is in the very best of American tradition!

Having said that, you’ll mostly find me these days in New Delhi and Banaras, India, where I’m working on an international project to clean the revered River Ganges. At times the fecal-coliform pollutant count at Hindu ritual bathing sites is around 8,000 times the acceptable level for human beings. Fecal coliform is a measurement of human and animal waste in water.

The interest in India started with a houseguest of ours, back in 1993. Dr. Veer Bhadra Mishra is the leading Ganges campaigner who was invited to Sweden to give lectures. As mahant (high priest) of a Hindu temple in Banaras, Mishra is also a water hydrologist who early on understood the lethal nature of pollution in the sacred Ganges.

Starting in 1998 I worked with the Clean the Ganges campaign, first as a fundraiser and volunteer, and now as a fulltime troublemaker. The past 18 months have been hectic, more or less commuting between Sweden and India. Along the way, my friends and I managed to dredge up financial support from Swedish Aid to complement existing technical assistance funding from the US and Australia. Private and public fundraising is now being stepped up considerably in preparation for a mind-blowing Campaign later this year.

My background as a journalist and overall media freak has hopefully served the Campaign reasonably well in recent weeks with the launch of www.cleanganga.com. It’s got a few teething problems, but check it out anyway! “Ganga” is the Indian name for Ganges.

So I suppose I’ve pulled up stakes once again, restlessly travelling hither and yon. Even within India I move about a good deal, mostly between a temporary residence in New Delhi and Tulsi Ghat in Banaras 1,000 km away.

It’s a strange life, I guess, but then, what’s normal? In any event, my life sorta works, in keeping with my own limitations and also in rough tandem with loved ones and friends. This life, like everybody else’s, mostly consists of details. How we deal with them is the gist of it all, I guess.

But back to Pomona.
In a word, Pomona College meant the world to me. It’ll be terrific returning to the Sagehen stamping grounds and classmates of yore.