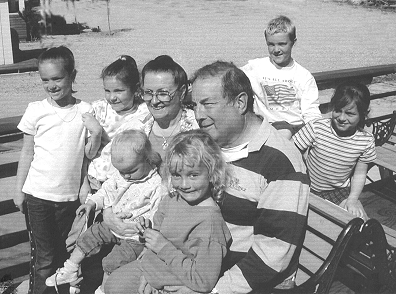 Jeff Fastnow (Pomona '61) and I were married September 3, 1960. After he graduated we moved to West Los Angeles and then to San Marino where we have remained in the same home for 40 years! After raising four daughters, (Kathi, born 4/12/62, BA Willamette, MFA CalArts; Beth, born 7/10/63, BA UC Santa Barbara; Peggy, born 6/10/67, BA Pomona; and Chris born 12/10/69, BA Wheaton (Ill), Ph.D. University of Iowa) and doing lots of PTA, Girl Scouts, Soccer Mom, Back Stage Mom, and Rainbow Girls sorts of things I decided to go back to school. Number three daughter (Peggy), then a junior at Pomona, suggested that I finish my Pomona education. They actually let me continue under my "original contract" (I was not required to take the dreaded 'o-chem'!!) Believe me, taking biology classes with your daughter is fun!!! I took two years to finish what should have been my senior year and enjoyed the experience immensely. Plus, I got to know two generations of professors.

The first time around Yost Amrein, Mr. McCarthy and Mr. Gleason were memorable; in '89 and '90, Larry Oglesby, Rick Haslet and especially Sherwin Carlquist. After finally graduating from Pomona, with the encouragement of Sherwin Carlquist, I wandered north of Foothill Blvd. to the Rancho Santa Ana Botanic Garden and earned an MA in Botany from CGS. I think that the most important aspect of the Pomona experience -both times - was the love of learning and the opportunity for further inquiry that was always encouraged.

I am very proud of our daughters, their husbands, and the grandkids. They are all, of course, way above average in looks and intelligence! About 20 years ago Jeff & I bought a second home in Lake Arrowhead and immediately began to remodel it. We seem to be on a cycle of about 8 to 10 years, but the last round appears to have been completed. Now we plan to just enjoy it! We have room for all the kids and grandkids and we love having them all there.

Jeff has semi retired but I have a new project. During the past two years, under the auspices of Community Partners, an incubator of non-profit start-ups, I have been working on establishing Hill-Harbison House (formerly known as the San Marino Girl Scout House) as an independent non-profit community center. I'm learning a lot about working with a Board of Directors, government entities, volunteers of varying abilities, delegating, mounds of paperwork, begging for money, and soon, I hope, successful grant writing! After I get this monster tamed I hope to get back to sewing, quilting, gardening, genealogy, playing with dogs and grandchildren and some traveling.