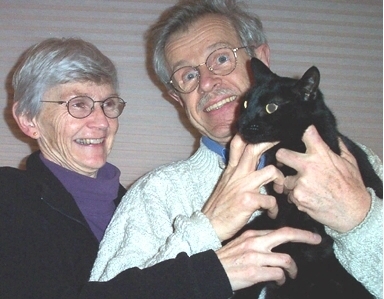 What's been happening:
After the four idyllic years at Pomona1 and another four at McGill2, I did an internship and residency in medicine on the Osler service at Hopkins, where I met Monica, whom I married in 1969. She chose oncology as a career and I chose endocrine research in the ivory tower. After spending two years at NIH3, I went to Yale as an endocrine fellow, then stayed on the faculty. Monica, ever-efficient, had twin daughters while she worked at Yale Health Plan. We then both accepted faculty positions at SUNY at Buffalo. I run the research program at the VA Hospital, dealing with bean counters and capricious shifts in funding4. (Our VA research building was constructed without pork barrel funds). We do rewarding research and take good care of veterans (and hyperthyroid cats).

Problems:
Infoglut: 50 e-mails a day. Most with attachments that must be opened and read carefully in order to find to find the one that is boring but urgent.

We now can search tens of thousands of complete scientific articles on-line, which is exasperating for a highly distractible dabbler.

Our successful species:
We consume one third of the photosynthesized biomass on the land surface of the earth, but don’t worry: in the future we will be more efficient, eating the products of hydroponic fungus gardens.

There’s a certain natural symmetry in the fact that many of us will succumb as defects appear in the processes that should make some of our cells die every day.

Satisfactions:
Our girls remained happy with the colleges they attended (Middlebury, Pomona), and have found good mates and careers, in Boston and Berkeley.

Pomona classmates have generally lived with a clear objective of helping others.