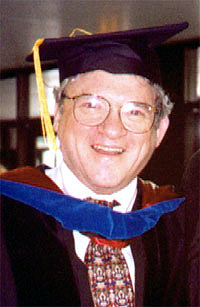 After graduating in 1962 I pursued a Ph.D. in History at Stanford University, specializing in French history. I have been teaching at Indiana University since 1967. I have also done some administration, chairing two different departments between 1978 and 1987. My research has allowed me to spend several years in France, a country I enjoy living in. I have written a number of books, two of which have been translated into French.

I have three daughters. Natalie, 35, graduated from University of Wisconsin and is a school teacher in New York. Leslie, 31, graduated from the University of California, Santa Cruz, and is a Social Worker at the Children's Hospital in Oakland. My third daughter, Laurel (by my second marriage) is 9, but thinks she is 13. My wife, Christine Matheu, an architect, has her own firm in Bloomington. So far – no grandchildren.

Pomona provided me with many special friendships which I still cherish; among them, Don Zimmerman '62; David Drabkin '63 and Mardi Rollow '63. As an International Relations major, I enjoyed the close camaraderie the students in that major had. I remember fondly retreats at Mt Baldy, where we would discuss and (in our minds) resolve the major problems of the world, such as nuclear war and world hunger. Too bad that neither Presidents Eisenhower nor Kennedy were listening in on our earnest discussions.

I remember fondly many professors; two of them ignited my love for history. Bud Poland was the consummate lecturer, who gave beautifully crafted lectures. I admired the precision of his language, his ability to end on a flourish, just as the bell rang. Henry Cord Meyer, who just died this fall, was a great advisor. He drove students hard and was demanding. Yet, he always did it with a good dose of humor, communicating affection and concern for his students' progress. For years after graduation I kept in touch with Professor Meyer and it meant a lot to me that he seemed to approve of my work. Although I had become a teacher myself, I continued to need and generously received approval from my teacher.

Retirement is not that many years off. We are thinking of maybe moving to the Bay Area; in that case we hope to be closer to family and old friends, a good number of whom go back to Pomona days.

With warm wishes to you all!